Our Lady of Caysasay, Taal (Philippines)

I first heard of Our Lady of Casaysay from a journalist friend, Monica, who was commissioned to write about the history of the devotion during its jubilee year. I had always wanted to see the place but never had a chance till last Sunday, when a planned Tagaytay trip to bring around a balikbayan guest Ruben, tuned into an unexpected pilgrimage to Taal.

The church is a few minutes away from the main Basilica of Taal, the Basilica of St. Martin de Tours. Not everyone knows the place as there is also an altar dedicated to Our Lady of Casaysay inside the basilica. 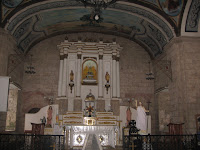 I was expecting a big church similar to the basilica so we almost missed the place. The church or chapel is small just like the image of Our Lady.

It has some similarity to the antique church of San Miguel in Manila before it was renovated. 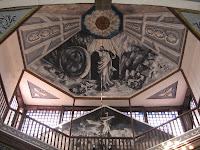 I particularly liked the painting on the ceiling which is made in black and white.


Some of the children selling sampaguitas kept asking us if we wanted to see the 'milagrosang balon' (miraculous spring) and I said yes of course. We were led to the back of the church, across a stony path, climbed a rugged rock to get to a grotto, where we prayed and finally to an old arch under which lies the two miraculous springs. 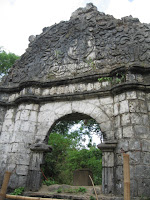 Below this old Arch, one can find the two springs where it is believed miraculous waters flow. 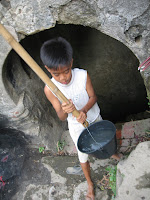 A small boy offered to scop up some water from the springs. The children told us that there are two water sources.

The one on the right is for the head, and the other one is for the body. 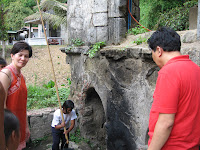 Took a photo of Bebeth and Ruben as they went around the slim path to get closer to the springs where we prayed and dipped our hands. 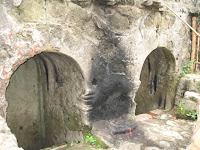 This is a closer look at the two sources of the miraculous water. 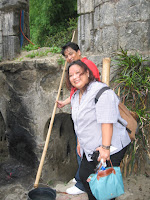 The children saw my almost empty plastic bottle and asked if I wanted to put some of the miraculous water inside. I said yes of course!

They said however that it would be better to get them from the faucet where it is filtered and you can find this just at the back of the chapel. 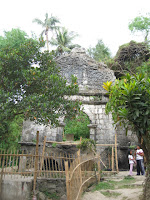 We then trekked back towards the direction of the sanctuary. 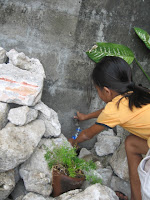 The little sampaguita vendor is filling up my plastic bottle first from the left faucet then the right (one of the springs for the body and the other for the head, remember?). 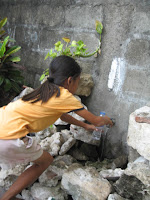 We tried asking for the story behind the miraculous image but we got some piece meal tales of how the statue of our lady was fished out from the river by Juan Maningcad.

Finally I was able to find something on the internet from Balita part of which I am quoting below. 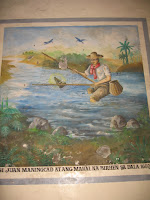 The story of the image began four centuries ago after a fisherman namedJuan Maningcad, found the statue in the Pansipit River in Barrio Casaysayin the year 1603.

But Taal folks said strange phenomenon had occurred when the image"disappeared" from time to time but comes back again the next day.This puzzled the people, including the parish priest.


It was said thatduring its disappearances, the statue goes back to the river where it wasoriginally located. The image was then brought to the church of thebarrio, but the same incident occurred.

Many years ago when the image was under the care of Ms. Maria del EspirituSanto, strange things had happened.Ms. Espiritu had a special urn where the image was placed.But according to the townsfolk of Taal, Ms Espiritu found the urn emptyone day. But the next morning the image was back in the urn.

This strange happening was repeated a number of times prompting, Ms.Espiritu to report the matter to the parish priest.To investigate the mysterious coming and going of the image, the priestdecided to have volunteers keep a vigil beside the urn.They sat and prayed, painstakingly waiting for the moment to happen. Thensuddenly they saw with their eyes the glorious image going out from theurn and coming back againThe priest decided that the villagers should light candles and follow theimage the next time it left from the urn.


When the phenomenon again occurred the image led the faithful to Caysasay,the place it was originally found..The villagers concluded that it was the Lady's wish to stay in the riverof Pansipit. They built a chapel in honor of the image.The first miracle of the image happened in 1611 when a native girl wascured from blindness.

An arch was soon built over the wells of the statue,and is now known as "Banal na Pook".The chapel was torn down and replaced by the coral stone structure in 1639.

Recent miracles: Leony Martinez, a PIA employee, experienced an excruciating abdominal painthat when she urinated, blood came out.A devotee of the Our Lady of Casaysay, she took the miracle water ofCaysasay and wiped it on her abdomen.

The blood stopped and the pain wasgone immediately. Cedee Buenafe, also an employee, took a picture of the image, thinking itwould make a pretty wall for her mobile phone. To her big surprise, thephoto that she took had two angels on both sides of Our Lady. She used itas a screen saver but two days later, the photo was deleted from hercellular phone.

But the most bizarre was that of Girlie Duldulao, a PIA employee, who wasran over by speeding Pajero and another car.As the traffic stopped, people nearby had to carry the Pajero to getDuldulao out from the bottom of the vehicle.

Those who saw the accident thought Duldulao was crushed to death, but shesurvived with only minor bruises, including a marking of the wheel on herlegs.Duldulao said later that the only thing she could recall was that all thewh ile she was thinking of the Virgin of Caysasay, while calling for Jesusas she utters "Lord, Oh Lord, Mama Mary!" seconds before the accident.

I've heard of Our Lady of Caysaysay from my mom who passed away in 1975. Your post somehow ended the unfinished story after almost 40 years. 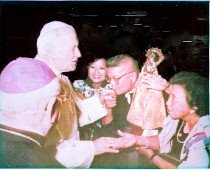 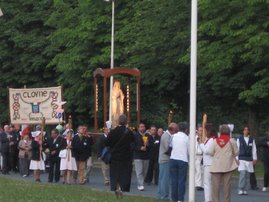